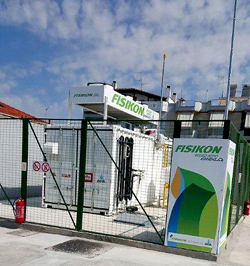 At Larissa, specifically in EKO gas station (Volos 65) operated from 1968 by Mr. Anastasios Pourikas, officially launched the disposal of natural gas for vehicles (FISIKON). As he informed the owner and manager of the service that the construction works were completed before the summer but mainly for bureaucratic reasons, delayed the completion of the license and the conversions to be made from PPC and DEPA.

The gas disposal now is a fact and is carried out in the early cars free for certified checks. According to Mr. Pourikas, natural gas is the fastest growing form of primary energy worldwide, given the primacy over the corresponding energies and as a dominant energy choice of the European Union, is considered the 21st century fuel as the "bridge" for the transition from conventional to renewable energies. Driving a motor vehicle with Natural Gas achieves one significant savings in fuel costs per kilometer. The worldwide average for fuel costs indicates that the driving a vehicle with gas achieves saving of over 50% compared to a vehicle driven by gasoline and saving exceeding 30% relative to a moving vehicle oil.

More and more governments promote natural gas as the basis of an energy policy that is off hook from the dependence of importing petroleum products. Even in oil-producing countries such as Iran and Venezuela, politicians encourage the introduction of natural gas to increase oil exports. Also important is to remember that a kilogram FA contains much more energy than one liter of all other liquid fuels. More specifically, 1 kg natural gas drive is energy equivalent of 1.5 liters of gasoline, 1,3 liters of oil and 2 liters of LPG.

At the same time, he says he expects more use of natural gas vehicles in the near future after the bill for the conversion of vehicles to natural gas and the new car orders made by residents of Larissa and residents of the region.

In operation already are three automobile filling stations with gas, in Athens (Anthousa, Kifissia, Nea Filadelfia), a station in Thessaloniki (Pylea) and one in Volos which is ready for use. All these stations are corporate.

The Gas disposal system joined the Fuel Management System installed by RayCom, the automatic process of issuing a receipt.

Sales of natural gas are in kg.